The Wrong Way to Network

In my perhaps not-so-humble opinion. 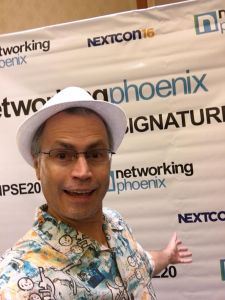 There’s a major networking event, called the Signature Event, held a couple of times a year in Phoenix. It’s sponsored by Networking Phoenix, and I enjoy attending whenever it fits into my schedule. In fact, I was attending even in the early years. I attended the event held this past Monday–it was the 20th such event–going into it with the objectives I always have: get out of the house, meet new people, and talk to the people I like.

I generally dress casual, mainly to separate myself from the dark suits who go there looking for who knows what. And I did find some remarkable people to talk with, including Sonja and Marc Raciti. Sonja is a psychologist and Marc a physicians assistant. Together, they run Healing Wounds, Inc., where they work with those suffering from PTSD. Marc also wrote a book called I Just Want to See the Trees, a Journey Through PTSD. I was drawn to this couple because Sonja had her hair died in multiple colors, and what’s more fun that that?

I talked quite a while with another guy named John. That’s all I know as I never got a card from him. It was his first time, and he looked lost. We talked for quite a while on a couple of different occasions throughout the evening. Turns out he’s something of a freelance process engineer who takes small companies and ramps them into large companies. He walked away with a few catch phrases he can use to market himself. What did I get? I got to see him smile and tell himself he’s glad he attended. That’s enough for me.

Then, there was the guy in the suit. It started off okay. We exchanged names and he asked what I do. I told him I write, and then I asked what he does. He told me it doesn’t matter, and brushed off the question when I pressed again. Red flags for me. This is a textbook answer to give when you are in a position to possibly intimidate people by your title or the size of your wallet. Thing is, that doesn’t impress me and I should have walked away right then. But, I don’t always quickly think on my feet–one good reason I’m not an attorney. So we talked more and when I told him I had, indeed, written several books, he asked if I’ve been on the New York Times bestseller list. When I told him no, he asked me why not.

Real answer: it isn’t currently an objective of mine. But the question tells me a lot. This is a guy interested in interrogating people to find somebody he can use. He’s a guy who uses dollars as a way to keep score. Entertaining or educating readers is not a viable goal for writing a book; just the propaganda value of landing on a bestseller list. Never mind that making goals you can’t control is really making a wish list. This guy might have been able to make me rich, but honestly, I don’t care. That’s not somebody I want to talk with, much less form any sort of business relationship with.

That’s not why I went to this event. That’s not the kind of person I want to know.